Home » Posts » Rain Beetles: How to Identify a New Insect 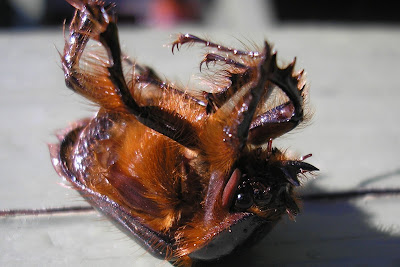 Rain beetle: Although she looks dead, she really wasn’t. She kept flipping over on her back and wiggling and stretching her legs. Today was a first. I actually looked closely at a very ugly beetle. Yes, I am becoming an insect gal. I know this for sure because my daughter and her friend Shyloh brought me home a very large, very alive beetle creature. I had asked all my family to bring home any interesting insects they find and had even given them each a ziploc sandwich bag to bring them home in. Yesterday was the first time someone brought me an insect treasure. They said they couldn’t bear to put it into a baggie so they used a small plastic container from my daughter’s lunch box. She said there were hundreds of the beetles so she felt like she could bring one to us to study
. 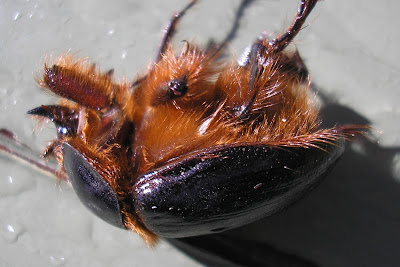 This photo shows her shiny covering and the hair on her underside.

At first I was disgusted by this creature but after taking her out of the container and looking carefully, I once again found the beauty in the design of the Creator. Now all that was left to do was to discover what sort of beetle this insect was.
Sequence:
1. I pulled out my field guide but could not see any beetles that looked like this one.

2.So it was off to the internet and we started by looking up “beetle, california” on Google. I am finding that if I Google something and then look at the images it takes me far less time to identify a creature.

3.Once you find an image that looks like your insect, click on the link associated with that image. The majority of the time this is enough to get you pointed in the right direction.

Here’s what I learned about this little female insect: Rain beetle or P. puncticollis (more on classification at BugGuide.net) and can be found in California woodlands. The male is approximately 1″ and the female can be slightly larger at 1 3/4″. The males have wings but the females do not. They range in color from reddish-brown to black. The underside is covered in hairy bristles.

The interesting thing about this beetle is that it makes a sudden appearance after a soaking rain….hence the name Rain beetle. We had a really good rain all the night before so I think this is probably why we were able to see this amazing creature.The life cycle of the Rain beetle is very long. The larvae, who feed on roots of live trees and bushes of oaks and conifers, take up to as much as 10-12 years to mature but once they become adults the males wait for the first rains to bring them out for their mating flight and the females dig a tunnel to the surface to wait for the males to find them. Here is the fascinating part:The conditions that trigger the males and females to emerge are so stringent that this may only happen in a population for a single day in a given year. This made the finding of this insect all the more precious since it is a rare event. 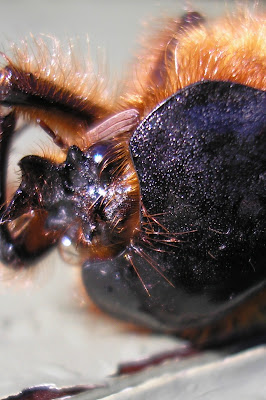 This is the head of the beetle and if you look closely you can see her little “horns”. The males fly slowly over the area, low to the ground, looking for the females who although rarely leave their underground burrow, wait at the burrow’s entrance for the arrival of the males. She puts off a pheromone that attracts the males. After mating the female closes off the entrance to her burrow and lays her eggs. These mature the following spring. 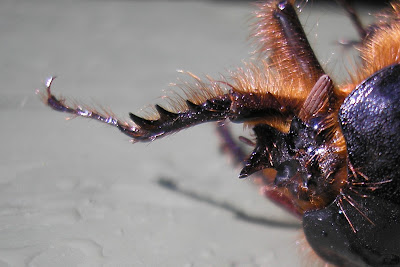 I love this photo that shows her leg parts.

Wow, so much to learn. I have a new appreciation for the study of insects after learning that this was not just an ugly bug. It has a whole life story to learn and now I can share it with others.

Final thought from the Handbook of Nature Study, page 6:
“When it is properly taught, the child is unconscious of mental effort or that he is suffering the act of teaching.”

I did all this research and it hardly felt like any effort at all. I will be striving to make our nature study so that it is interesting and feels not like work but like refreshment.

1 thought on “Rain Beetles: How to Identify a New Insect”