This was an outdoor weekend spent in the Sierras. We spent an afternoon taking a hike on snowshoes. It looks really cold and dreary in this photo but it was really not all that cold…above freezing by a few degrees. I could have done with a few less layers. 🙂 I took off my gloves for awhile and that helped. Most people we saw on the trail were on cross country skis but we enjoyed the crunch, crunch , crunch of snowshoes. I was on the lookout for mammal tracks. 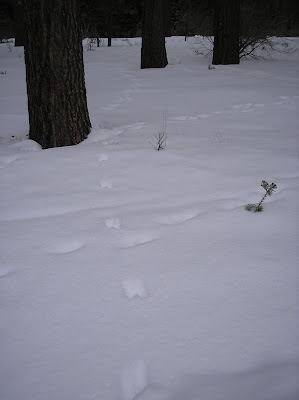 We saw lots of canine tracks beside the trail but as we worked our way up from the lake into the conifers, we were rewarded with these tracks. 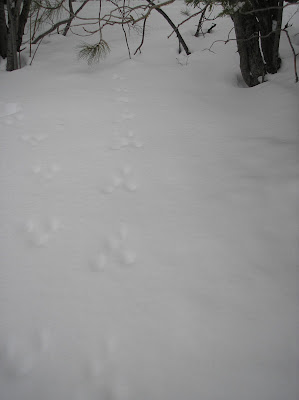 In this area there were many little “rabbit trails” giving us a clue as to what sort of mammal was in the area. I came home and discovered that they are more than likely Tahoe Snowshoe Hare tracks. (Lepus americanus tahoensis) See snowshoe hare.

We are new to identifying tracks so if anyone thinks they are from a different animal, please leave me a comment.

Not only did we see some mammal tracks but we were treated to a “new to us” bird. The red-breasted nuthatch. He was seen clinging to the side of this pine, sticking his head into little holes looking for some bark insects. He moved easily in all directions while clinging to the bark. Amazing. 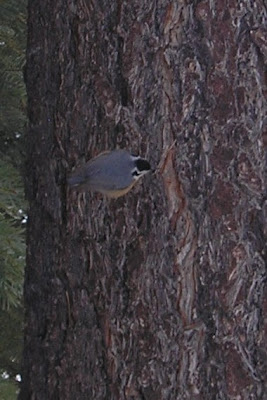 I was busy taking photos when a bunch of ducks flew into view. We saw them later eating some seeds that a fellow hiker had left along the shore. They were later joined by a few Canadian geese. 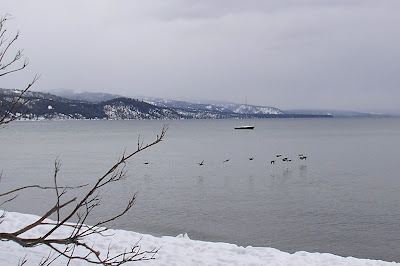 So I think we had a successful outing….we did manage to find some mammal tracks in the snow and that was our aim.

From the Handbook of Nature Study, page 217,
” An interesting relative of the cottontail is the varying hare or snow-show rabbit that lives in the wooded regions of north-eastern North America. Of all animals he is one of the most defenseless; foxes, mink, and other flesh-eating inhabitants of the woods find him an easy prey. He has not even a burrow to flee to when pursued by his enemies…..He has one important advantage over his enemies: twice each year his heavy coat of fur is shed. In the summer the coat is a reddish brown that so blends with his surroundings that he is hardly noticeable; in the winter it is perfectly white so that against a background of snow he is nearly invisible.”

Anna Botsford Comstock has included pages 215-219 with information on the cotton-tailed rabbit. I found these pages very useful in coming up with a way to study our snowshoe hare. Even though the information doesn’t completely apply to our hare, we can adapt her activities to our study.

Winter nature study at its best. 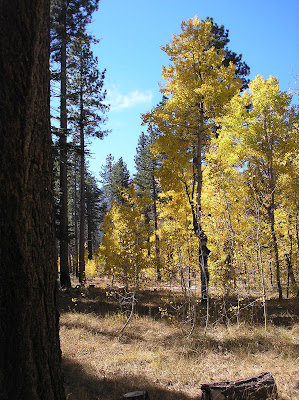 Here are some photos from our nature walk last weekend that I haven’t shared with you. The color of the aspens against the blue sky and greens of the evergreen forest make for a beautiful eyeful of complimentary color. 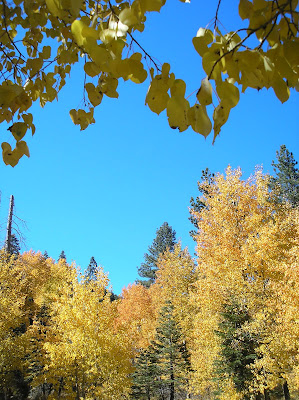 Would you ever get tired of seeing this view out your window? I would love to build a little cabin in the woods to retreat to when my life gets too stressful.

The Handbook of Nature Study has some wonderful ideas for tree study. From page 622:
“During autumn the attention of the children should be attracted to the leaves by their gorgeous colors. It is well to use this interest to cultivate their knowledge of the forms of leaves of trees; but the teaching of the tree species to the young child should be done quite incidentally and guardedly. If the teacher says to the child bringing a leaf, ‘This is a white oak leaf,” the child will soon quite unconsciously learn that leaf by name. Thus, tree study may be begun in the kindergarten or the primary grades.”

Page 623-626 has activities to complete during each of the four seasons with your tree. I am anxious to apply these to the study of our tree that we are watching for a year.

I am finding so much to learn about nature in my own area of the world. 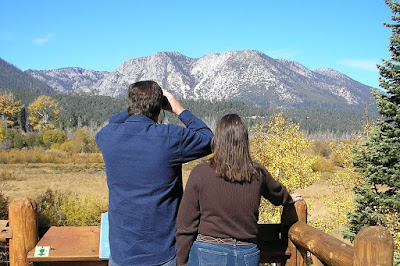 Yesterday we took another shot at finding some eagles to watch. We have an eagle habitat about 45 minutes from our house, near a salmon spawning creek. We went up there a few weeks ago to watch the salmon and we thought we saw an eagle circling overhead, up over the pines. Of course we hadn’t brought our binoculars along on that trip so we weren’t sure if it was eagle. 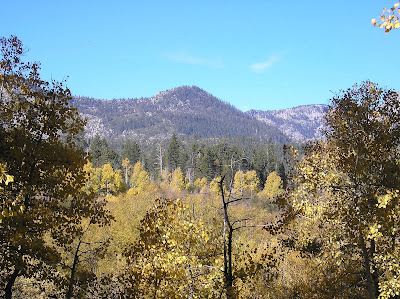 The dead tree in the distance along with the green trees has a nest in the top. Click the photo to make it larger and then you will see in the tree that looks dead a sort of platform nest on the top of it. Eagles nests are huge when they are being used.

This time we went back with binoculars in hand to see if we could spot him again. We didn’t. We did see a nest in the distance. We did see an snowy egret or egretta thula, some Canadian Geese, and several varieties of ducks. 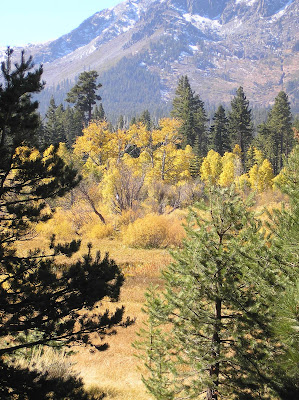 This is really a hard photo to see the snowy egret but he is the white dot in the brown tree in the middle of the photo…..click the photo to make it larger. They are normally down by the water but this one kept flying up into the trees. 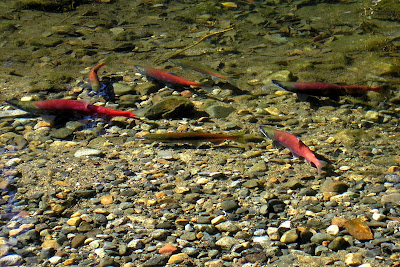 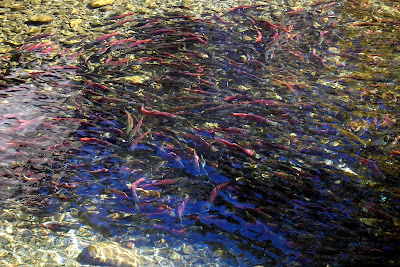 Thousands of salmon all trying to get upstream to spawn…so colorful.

The highlight of the day was watching the Kokanee salmon spawning in Taylor Creek. There were hundreds and hundreds of these brightly colored salmon, all making there way up the creek to spawn and die at the end of their life cycle.

There was nothing in the Handbook of Nature Study about eagles…not a common bird for most. I will look further into the bird section of the book in the spring when we are focusing on birds.