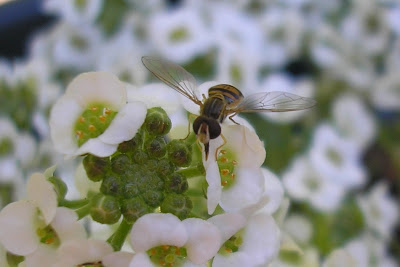 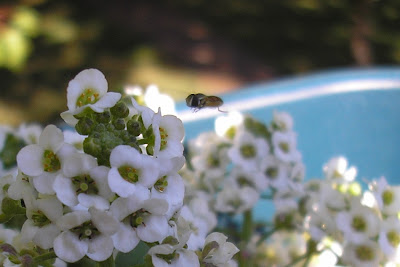 This insect was hovering over the sweet alyssum in the pot on my back deck. I just happened to catch him hovering and eating the nectar. I have been fascinated with his hovering and had always suspected he was some sort of bee. After doing some research online, I discovered in fact that he is an American Hover Fly or Metasyrphus americanus. Adults eat nectar but the larva preys on other insects such as aphids.

On page 10 in The Handbook to Nature Study, under the heading of “The Uses of Scientific Names”, it says, “Disquieting problems relative to scientific nomenclature always confront the teacher of nature-study. My own practice has been to use the popular names of species, except in cases where confusion might ensue, and to use the scientific names for anatomical parts. However, this matter is of little importance if the teacher bears in mind that the purpose of nature-study is to know the subject under observation and to learn the name incidentally.”

So we now have a new purpose to our nature study: To know the subject under observation and not necessarily to name it. I am assuming the author means to not necessarily know its scientific name. I am no longer satisfied to just observe, I want to identify what I am looking at. Nature study has aroused in me a great curiosity to know more deeply the creation around me. Now I have a new friend, the American Hover Fly.