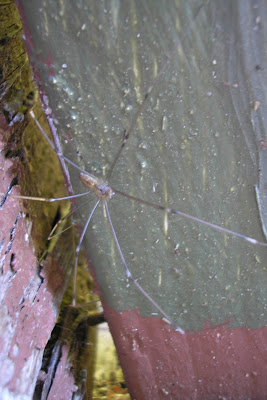 I know this is a crazy photo of this daddy longlegs but he wasn’t going to cooperate with me at all. He had been sitting near his web waiting but when he saw me move closer, he went like lightning down to the bottom of the deck railing to a safe place. I zoomed in as much as possible and got this shot of him hanging out. 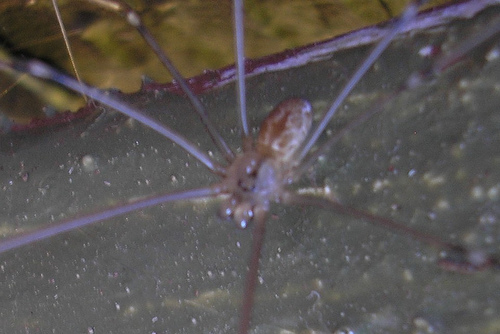 So here is what I learned from page 295 from the Handbook of Nature Study. “The word insect is often applied incorrectly to any minute animal; but the term should be restricted to those forms possessiong six legs and belonging to the class, Hexapoda. The name Hexapoda is from two Greek words: hex, six; and pous, foot. It refers to the fact that the members of this order differ from other arthropods in the possession of only six feet. Thus spiders, which have eight legs, are not insects.” So even though we are focusing on insects for the fall term, we still enjoyed seeing this creature that is really an arachnid.

What is a spider? Spiders are arachnids not insects, but both spiders and insects belong to the largest group of animals on Earth, the arthropods – animals with hard external skeletons and jointed limbs (greek arthro = joint, podos = footed). So there you have it the difference between insects and spiders. 🙂

Edit: Here are some more links to learn about daddy long legs.

And I found an article that even says that daddy long legs are not even spiders. Here is an exerpt:”Although they resemble spiders, daddy long-legs, more correctly called harvestmen, are neither spiders nor insects. Taxonomically, they are arthropods, in the same class as spiders, Arachnida, but in a different order, Phalangida. Anatomically daddy long-legs differ from spiders because their three body segments — head, thorax and abdomen, are joined as one compact body segment. Spiders have two body segments — the head and thorax are joined as the cephalothorax, and the abdomen is the second body segment. Insects, which are taxonomically in the class Insecta, have three distinct body segments.” Found at Wisconsin Natural Resources magazine.

So now I can’t even say that the daddy longlegs is even a spider! It is technically an arthropod, an Arachnida, and in the order of Phalangida. Whew! This is getting hard to keep track of but I am learning a lot.