As part of this month’s newsletter nature study suggestions, we have been on the lookout for insect home related subjects to take a closer look at in person. As it usually happens, we found some interesting things to learn about….research was definitely involved. 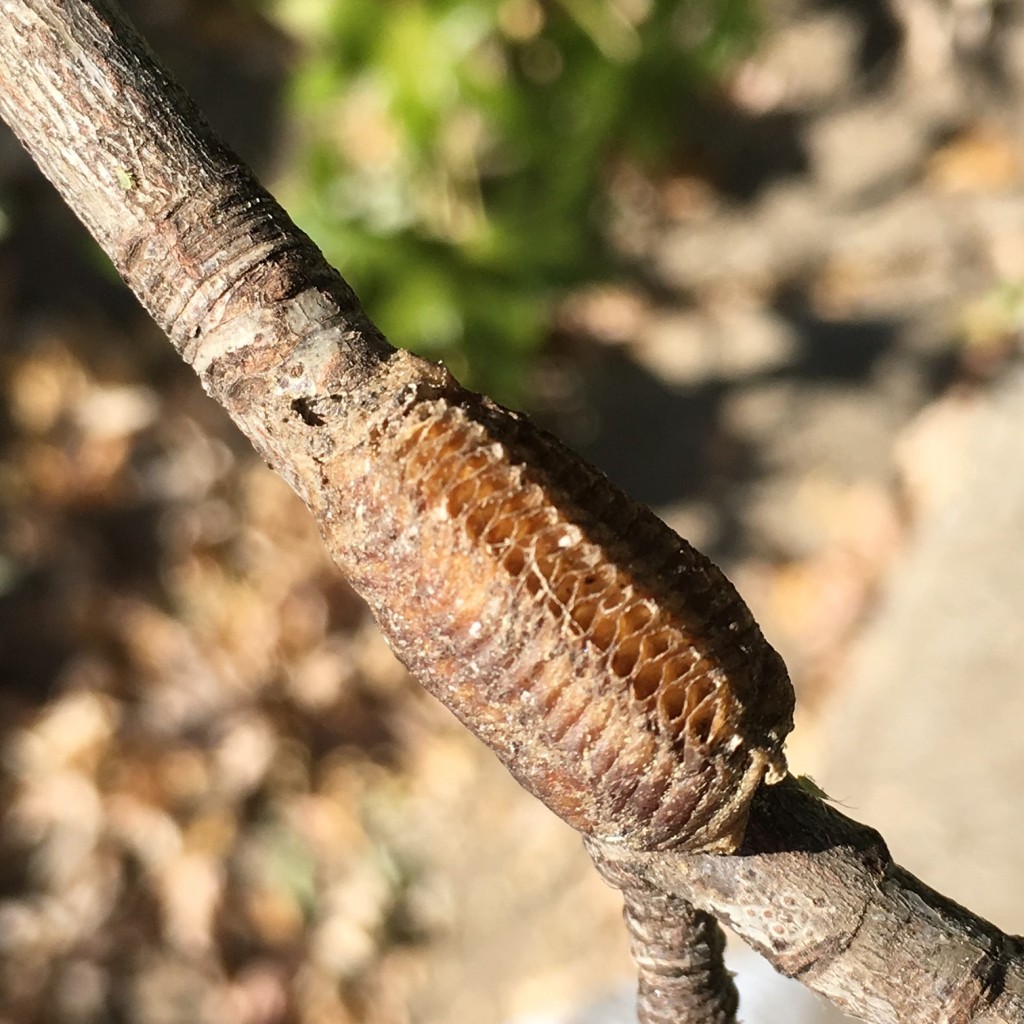 It does amaze me that there are so many things happening around us in the natural world that go unnoticed. Take the image above. My husband was trimming some tree branches from our maple tree last weekend and as we cleaned up the mess, we both noticed this growth on a branch. What is it? A gall of some sort? We decided to submit the image to Bugguide.net for some help in identifying what insect created this home. Guess what? They told me it was a praying mantis egg sack! Cool stuff! (I found this article very interesting: Dave’s Garden Praying Mantis.)

We are prone to walking right by the ant hills on our hikes. The common ant is an amazing engineer and we don’t often take time to note his industriousness. 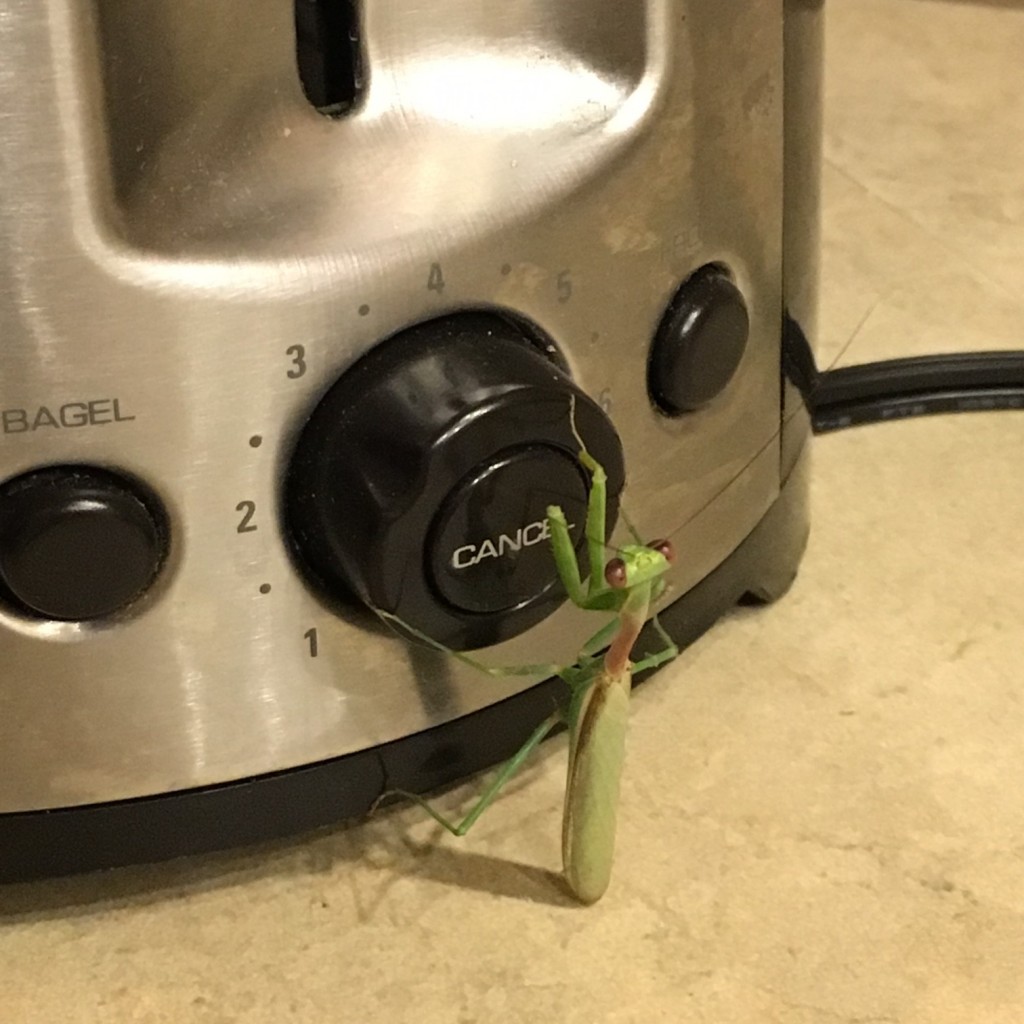 Ok, this insect is not in his home but rather in MY home. Do you think he wants some toast or a bagel? We safely escorted him outside after taking a few pictures. 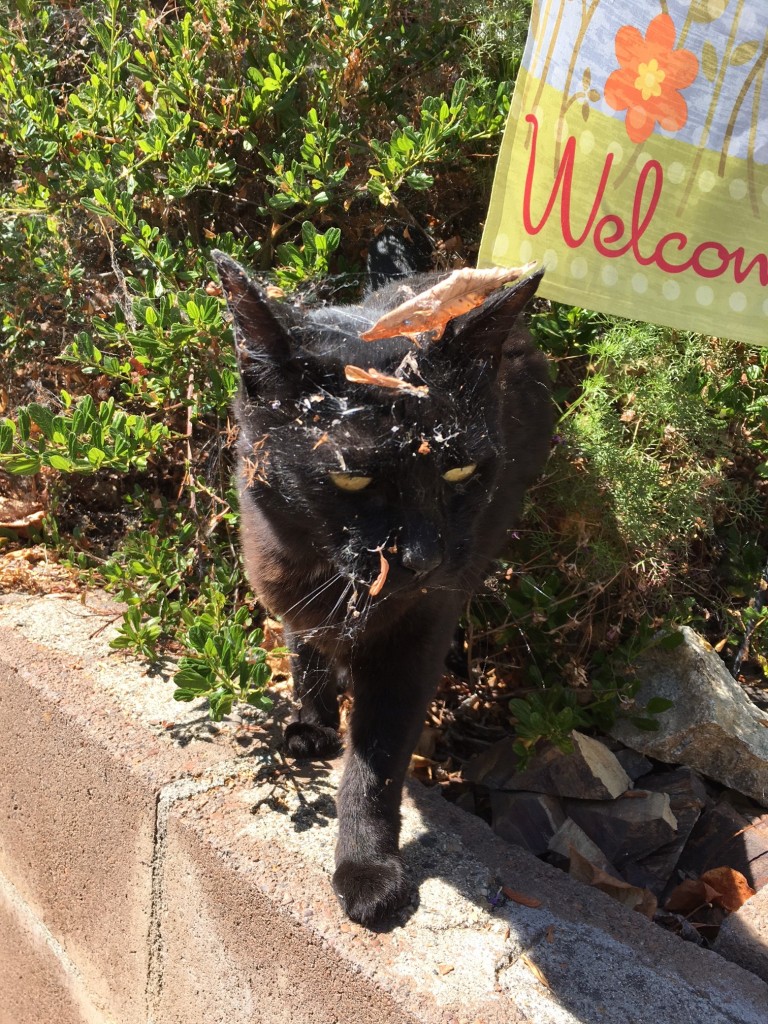 My cat is always hiding in the bushes and as we looked for signs of insects in our year she emerged from her hiding spot covered in cobwebs and dried leaves. She knows all the good spots to hideaway in our front yard but is willing to welcome us as we walk up the steps with a friendly meow. Give her a pet on the head as you walk by if you ever visit.

We will continue to look for insect homes as the season progresses. I didn’t spy any leaf rollers this time but I am keeping my eyes wide open for the opportunity to see these interesting creatures up close.

“The teacher of nature study, like the teacher of any subject, will deny himself much if he does not go to the literature of the subject for help in his work. But there is an especial danger in such help on this subject. So soon as one takes to the book instead of to nature for questions that nature could easily answer, he loses the spirit of the work. One must be careful, therefore, to ask many questions of things themselves under the open sky, and to read with patience in nature’s book.”
The Study of Nature by Samuel C. Schmucker 1908 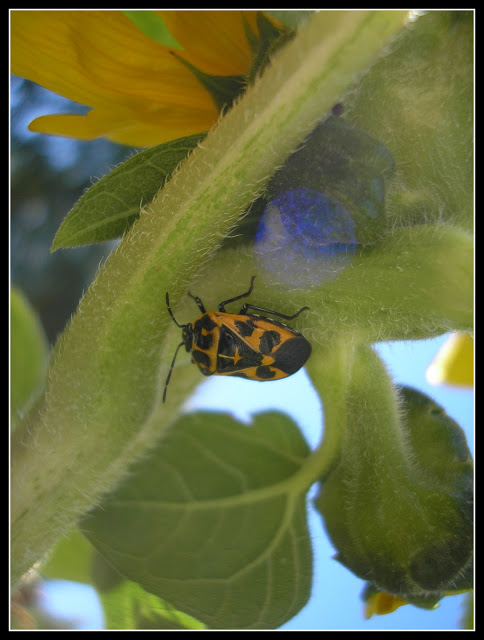 So have you been able to use the grid to help your study of insects this month? I encourage you to give it a try and enjoy this relaxed form of nature study. 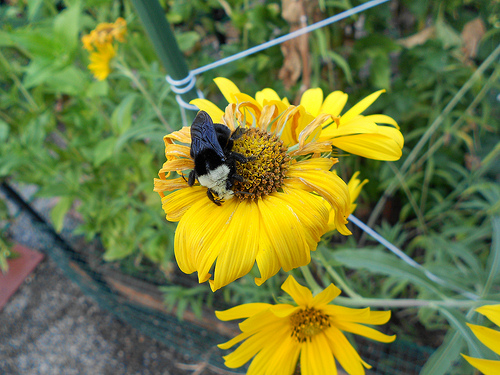 Cooler weather means more time spent outside during the day….we went from really hot weather to cool weather in the span of a day or two. I am so pleased with these late blooming sunflowers and I am going to plant more of them next year. The insects have been visiting them every day and when I went out to snip a few flowers for the kitchen table, I saw this big guy! 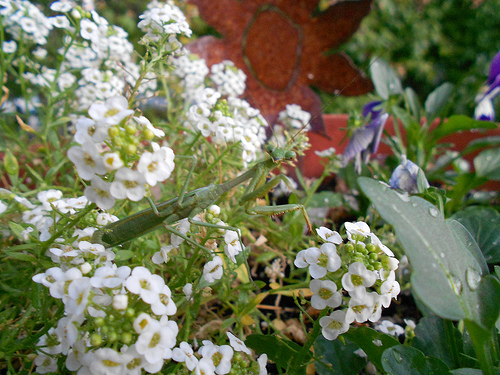 This praying mantis decided to hang out on my stove one morning. It must have been pretty funny watching me try to scoop him up while he was hopping from side to side. I would try to scoop him up and he would hop just out of my reach. I would try again and he would hop too fast. Finally I got a bowl and set it over him and then slid a piece of paper under the bowl. Success! I transplanted him outside to my potted plants and he was happy to pose for a few minutes on the allysum. 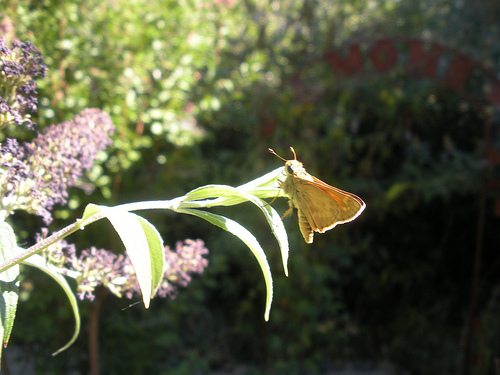 Our butterfly bushes are still blooming, in white, lavender, and deep purple. I see the hummingbirds, bees, and butterflies all buzzing in and around in the morning sunshine. Makes me happy to see such a busy community right in my flowerbeds. We have spotted a few monarchs lately…none captured with the camera yet. They are fast! 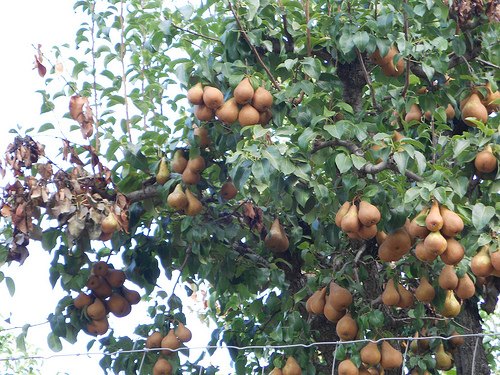 We were out for a drive and took a back road only to find a pear orchard within about two miles of my house! It is tucked away off the beaten path and as we slowly drove down the lane I tried to snap a few images…..glorious fall pears to enjoy!

We are going out and about tomorrow so stay tuned for some more back roads loveliness. 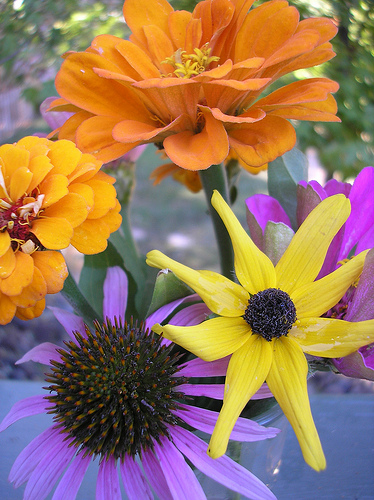 We were busy picking flowers and taking some photos when we had a visitor. It hopped right up on my arm and it tickled. I realized I had a visitor. My son scooped him up and put him on a flower while I captured him in a few photos. 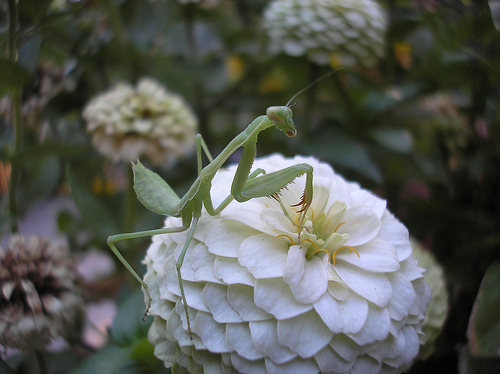 I was pretty excited until I realized that the challenge was cricket, grasshopper, and katydid….we had ourselves a praying mantis! Oh well, it was fun observing him up close anyway. 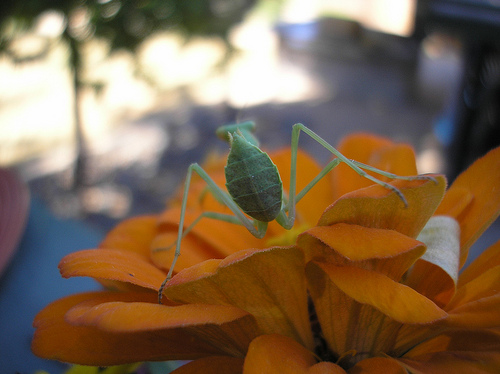 Here is his behind….way too funny huh? 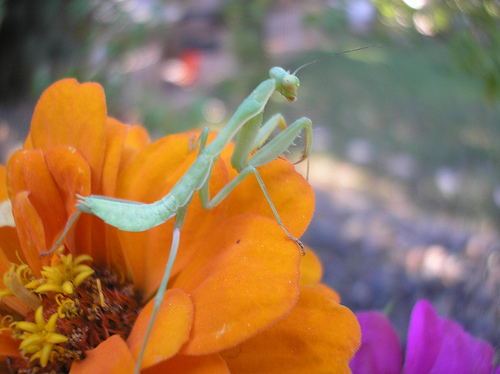 He was very good at posing. It made me laugh because every time I tried to take his photo, he would move so his head was facing away from the camera. He would actually look right at me and then turn at the last minute. 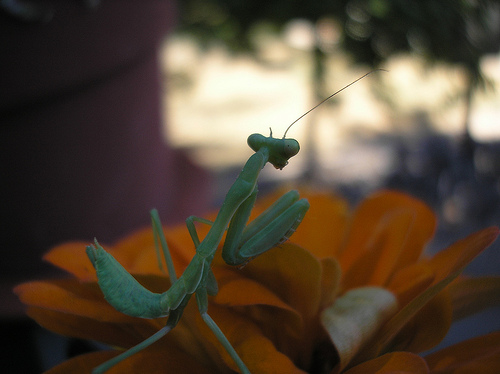 One last pose…I think he only had one antennae.

We spent last week in Nevada and it was amazing to us how many grasshoppers there were in the barren landscape. I never did get a single photo of the grasshoppers but we talked about their habits quite a bit as we were out and about.They were rather small grasshoppers in comparison to the one we found near a river in Reno. 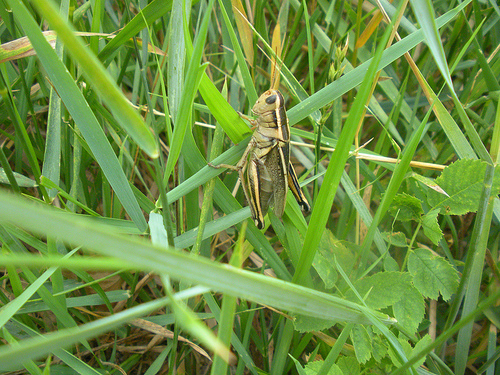 I shared this guy last week and since them we have been trying to identify him with no success. He was rather large, probably close to 2 inches long. We think it may be a two-striped grasshopper.

Since we had crickets, grasshoppers, and katydids on our minds, we have slowed down a bit to try to find some to observe. We went out several times to try to hear some crickets but they seem to be smaller in number so the volume is less than usual. It has been a crazy weather year and I am wondering if it is effecting the crickets.

Sometimes I think we might learn more when we have trouble locating our challenge subject. We definitely find more to learn about.